Last weekend, Cachi was the tourists’ choice not only for its natural wonders and the warmth of the “vallistas” who live there. It was also chosen by unidentified flying objects, who flew over its skies before the incredulous gaze of thousands of onlookers. 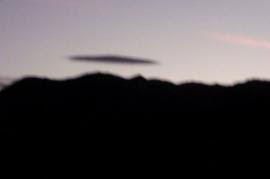 One witness managed to capture the moment: it was renowned aviator Tony Galvagno, the protagonist of the 1990’s incident [near the town of] Joaquin V. Gonzalez promoted as the “Argentinean Roswell”, with domestic and international repercussions. At that time, the aviator from Cachi witnessed from the town of Anta the fall of a strange object that caused a tremendous explosion. He later went public about being threatened by various organizations, who caused him to desist from the research he had undertaken.