A Second UFO Report Out of Jáchal, Argentina 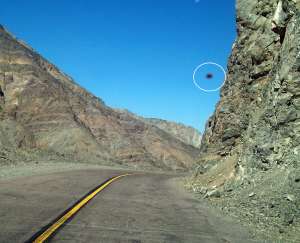 The first time it was in Gualcamayo and now over Route 150. There is commotion in Jáchal because there have been two cases in less than a month involving people who made public their photos of UFOs crossing the northern skies.

On this occasion, a native of Jáchal living in Buenos Aires states that he photographed one while he and his family drove between the mountains on Route 150. The photos were taken by Héctor Daniel Godoy, a "jachalero" residing in Quilmes who had gone back to visit his home town.

Several days ago, Héctor, his wife and a cousin decided to tour the upland valleys of Iglesias. On the way back, the party took several photos of Route 150 without noticing anything strange in the sky during the drive. The surprise came that evening, when they downloaded the photos to their computer and discovered that a brown, oval shape -- suspended in mid-air -- appeared on two separate photos.

On one photo, the object is visible between the mountains and behind a blind curve on the road; in the other, the shape contrasts clearly against the sky. "We realized something strange was going on when we downloaded the photo. Upon magnifying it, we couldn't believe it. It surprised us and startled us," explained Godoy.